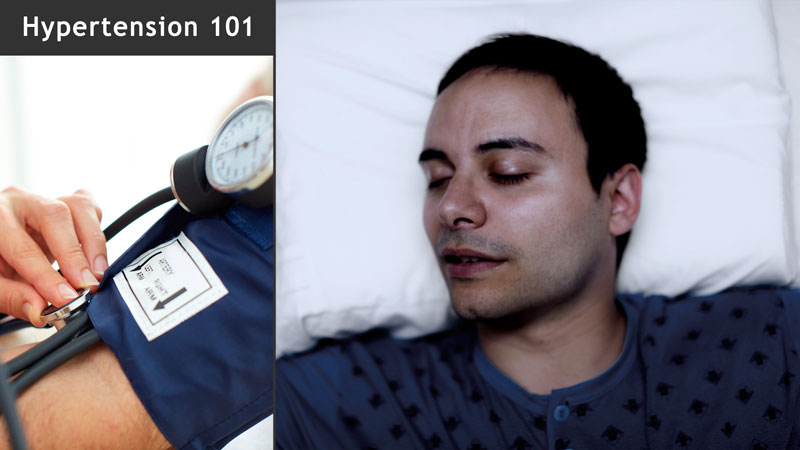 What about sleep or rest and high blood pressure? Now, as you know if you’ve been watching any of our videos, you know we think that sleep is a big deal, and that’s based on the science. Physiology is pretty impressive, it’s a resetting, repairing time of every 24 hours. And this includes our vascular system.

Sleep apnea, obstructive sleep apnea what it’s usually called, it keeps stopping breathing all night long, you’re not waking up, but you’re basically almost dying all through the night. Physiologically this is really stressful. It’s not gonna have a good effect on your blood pressure and sure enough people with sleep apnea have higher blood pressure, maybe a cause of your or other people’s high blood pressure, or at least part of it.

We’re not able to rest, we’re not able to reset for the next day. We’re supposed to be recovering from stress, preparing for the challenges. Anything that messes with our sleep, decreases our capacity to deal with stress in the future and is a significant problem. See some of our other great videos on sleep, including for the vascular system.

So, it’s not just about the quality and the quantity of your sleep it turns out. It’s also about the when. This has to do with are we in sync with nature. The science is showing that people that are out of sync with the sun, such as shift workers, have higher inflammatory chemicals and higher blood pressure in their system. We want to be in sync with nature, we’re gonna talk about that later.

Here’s a tip: part of what disrupts our sleep is often our digestion. Now, it turns out our gut has a lot, a lot, a lot of neurons in it. As does our head and the two talk to each other. And they both want to rest at night. When we load up the system, meaning our stomach, our GI tract, our digestive system with a whole bunch of food, especially heavy food in the evening, and then try to sleep, it ain’t happening. The rest is not happening. So, one of the most common problems is reflux. Full belly, heartburn, just can’t sleep well. And you wake up in the morning feeling groggy and tired and we need lots of caffeine to get going, it’s just kind of a stupid cycle.

So, if you’re waking up feeling like you’ve been run over by a semi and everything else seems to be in order, check your digestive food pattern, make sure you’re actually letting your digestive system rest at night. Just like the rest of your body.

Now, there are other cycles of rest in the human existence. There’s something called a circaseptan cycle which is basically the seven day a week. All around the world we have the seven day week thing and a tradition, often religious, of resting on one of those days. Turns out that’s fairly important. Holidays, festivals, vacations, all of these periods and cycles of rest and recovery are really important. We need those.

So, our vascular system needs exercise and rest, just like the rest of our body does. Make sure you’re building that in to a proper understanding of your blood pressure and a proper treatment plan for treating the cause of hypertension.

How to Prevent High Blood Pressure with Diet

Strengthen Your Immune System with Sleep