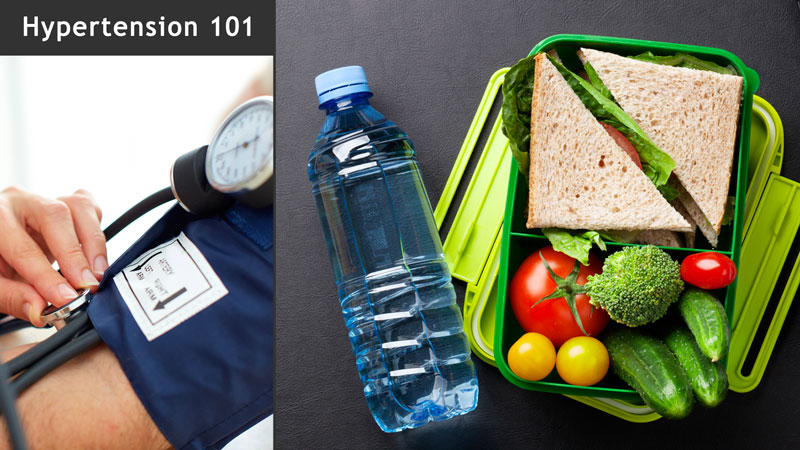 Okay. Nutrition and high blood pressure. Like in the study we talked about in the introduction, nutrition is huge for high blood pressure. It is probably the single most impactful thing you can do to get your blood pressure to a healthy place and keep it there. Just like how they live in third world on basically veggies and rice and lots of physical activity, they don’t get high blood pressure. That’s our starting reference point. One of the most well known nutritional interventions that has been studied is called the DASH Diet, D, A, S, H, Dietary Approaches for Stopping Hypertension. This is particularly important in us industrialized countries where we seem to have forgotten how we’re supposed to eat.

Some highlights of nutrition, there’s a lot of detail we could cover. The big picture, the blue zones, these zones around the planet that were coated in blue on the maps of the world where people live long and healthy to 100 years old or more and doing really, really well. The only one of those blue zones in an industrialized country was actually in Southern California where there are a lot of Seventh Day Adventists who tend to be vegetarian often, about 50% of them. The Adventist’s health studies are some of the most insightful nutritional studies there are on large groups of people. Basically, what it show is that the more vegetarian people are, the better their blood pressure is.

Now, some of this gets into issues of nutrient density. Calcium, magnesium, potassium, phytonutrients, antioxidants, and so forth. Those sources are going to be richer in the plant foods. And it turns out there are natural ACE inhibitors, angiotensin-converting enzyme inhibitors which are a category prescription medicine, in food. There are a lot of details in nutrition. Again, you don’t need to know the weeds, but you need to know the concepts and the principles.

How much reduction are we talking about here doc? If I do different things with my diet, how much will my blood pressure come down? In the research for the DASH diet, the average person reduced their blood pressure about 11 points. That’s bigger than almost any other lifestyle measure and it’s more than a lot of prescription medications. And it’s probably true based on the science and what I have witnessed personally that many people can better results even than that, largely depending on where they start.

Now, what if you just cut out salt? Cut it down, not completely out. Research shows about five or six points reduction, on average. What if you up your potassium intake? Again, mostly through plant foods it’s going to happen. About four or five points lower from increasing your potassium. Now, there’s also a relationship to weight. I remember running into a researcher at a conference that did a lot of these big studies and when they have people lose weight that were overweight to start with, once they got past a weight loss of about 5-10% of their body weight, their blood pressure, their blood sugar that was high, all that started to come down towards normal. Don’t be discouraged at first, you may need to get some waist lost under your belt before the blood pressure comes down further.

Now, salt. This has been a little bit of a controversial topic. We just mentioned five to six points reduction for most people. New England Journal of Medicine published a study just a 30% decrease in sodium intake, which more should be the target, actually, equates to about 200 to 400 thousand life years saved. Now, let that sink in for a moment. Compare that to plane crashes, the number of people we’ve lost in military activities. 200-400 thousand years worth of life, equivalent to somewhere between 10 and 24 billion dollars per year in health care costs. This is a big problem.

Basically, we’re a giant pickle vat in this country, we’re pickling ourselves. Most of this is found in prepared foods, canned foods, fast foods, restaurants and so forth, it’s not what you’re shaking on your food. The majority of us should have about a teaspoon per day total as the max. Again, most of that’s way more than what’s already in your food. Just as a tip, if you go to reduce your sodium, yes, it’s going to be different than what you’re used to, but what is right for the human body? It seems to take about 12 weeks to reeducate the taste buds toward a more normal lower sodium diet and be perfectly satisfied and happy. If you’re going to reduce your sodium, I encourage you, give yourself some space, a little bit of time.

Now, what about beverages? We’re going to cover alcohol in the chemical segment. But think about this. Historically, through human history, where did human beings drink their calories? There’s not a lot. Whatever drinks there were it was hard to make and you didn’t drink very much of it except for when we are what? Babies, we’re toothless infants, we need our mother’s milk at least until we get our own chompers and then we don’t do our mother’s milk. Drinking calories is actually not very human, if you will, unless you’re a baby or you’ve lost your chompers.

Now, keep liquid calories to a bare minimum. Some of the research on water is pretty limited. There are actually, surprisingly, has not been that much. There’s some that’s spring water with natural minerals can be helpful for people who are deficient in calcium or magnesium. There is physiologic reason to think that at least some people drinking more water maybe very helpful. Again, getting back to that viscosity concept. I can tell you in clinical practice I have patients that whatever other medicines we’re doing, lifestyle changes, water has made the biggest difference of anything. Regular, good, quality, quantity of daily water.

Supplements we’re just going to touch on, there’s varying degrees of evidence. Some of it is contradictory but the ones that seem to have at least some degree of reasonable evidence are coenzyme Q-10, magnesium, omega 3s, L-arginine, hibiscus as in tea or similar, probiotics, and a few other smaller ones.

Nutrition. It is probably the most powerful single thing you can do for a healthy vascular system and your blood pressure in particular. Eat well.

In brief: Your guide to lowering your blood pressure with DASH. National Heart, Lung, and Blood Institute. http://www.nhlbi.nih.gov/health/resources/heart/hbp-dash-in-brief-html. Accessed January 1, 2019.