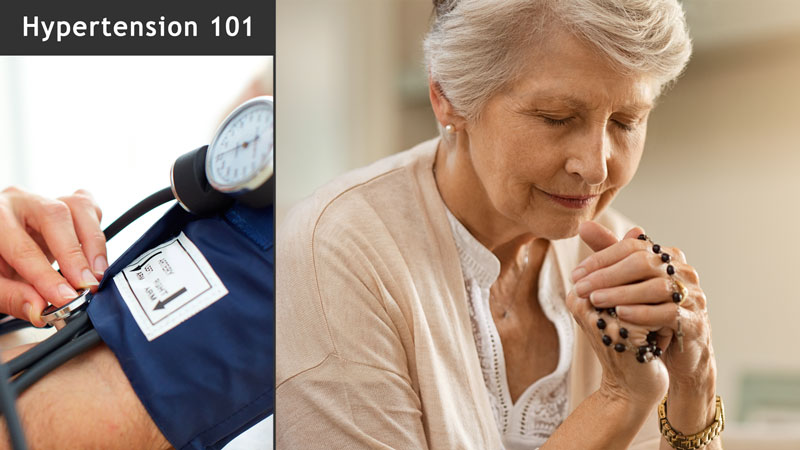 So what does spiritual or spirituality have to do with high blood pressure? First of all, let’s define spiritual. We need to understand it as the deepest part of who we are. It’s the who of our existence. It’s our place in the universe, and our relationships with higher powers, the universe, other people, society and so forth. It’s different than religious. We talk about religious, we talk about spiritual. Those two aren’t necessarily the same thing and this gets important to understand the distinction because in the scientific studies, religious behaviors are often studied, and those things are actually different than a spiritual experience where a state of being or mind, which is admittedly hard to measure oftentimes, so just keep those distinctions in mind as we look at the science, even with those distinctions, different religious behaviors are associated with better blood pressure, may, or may not indicate a healthy spiritual experience.

I mean questions or feelings like existential questions, questions like, “Why has God abandoned me? Why am I suffering like this?” Feeling disconnected, alone and/or like there’s some negative bigger picture context. Makes sense when you actually get into the details.

Shame and guilt. People who have shame produce more cortisol, stress hormones. It’s going to raise your blood pressure. Forgiveness, grace turns out that making things right with other people is associated with better blood pressure numbers and there was one study in particular that was done that is “hypertension reduction through forgiveness training,” and they begin with people, and it turns out the people that had higher anger levels, to begin with, had significant decreases in blood pressure and they concluded that these interventions were very clinically relevant, meaning they can be used to treat high blood pressure. Forgiveness training, not a pill.

And it turns out that the kind of forgiveness gets important. Just saying, “Yeah, I forgive you,” doesn’t do it. It’s emotional forgiveness, that’s the powerful kind. The kind that gets into our psyche and that we’re in a different place, we’re no longer generating those negative, harmful emotions because we, on an internal level, have let go of them. We have given forgiveness. We’ve given grace if you will, and it changes our nervous system and its activity and thus our stress, our hormones, and our blood pressure.

Altruism, serving other people spiritual value, if you will, instead of just living to get and take. What if you live to give? Well, it turns out the people who are sponsors, in other words, they’re helping other people in 12-step addiction programs do far better in their own lifestyle practices such as sleep and nutrition and exercise, which are very, very important, so altruism, active altruism is actually very, very healthy.

Gratitude, some really cool research coming out on gratitude, in people with heart failure, those with more gratitude had better measures on their actual heart function. Now, they’ve tried to dive in deeper, trying to sort this out, tease out what’s going on. They had some of these people keep a gratitude journal for eight weeks. And it turns out the people that did this, their chemical measures of inflammation went down, and their hearts showed healthier rhythm patterns. Pretty impressive stuff in people with heart failure, and they concluded, they were able to determine, that gratitude specifically was either the total or at least partial mechanism through which spiritual wellbeing was translating into physical benefits. Wasn’t religiousness, wasn’t religiosity kinds of stuff. It was were they experiencing this as a spiritual thing? Were they experiencing practicing gratitude? And that seemed to be the primary mechanism through which the physical benefit happened. Pretty cool stuff.

So the spiritual heart, if you will, has very real major effects on our physical heart and our vascular system. It’s providing either poison or treatment for our blood pressure, and based on the science, the spiritual dimension needs to be an integral part of best practice in assessing and treating hypertension.